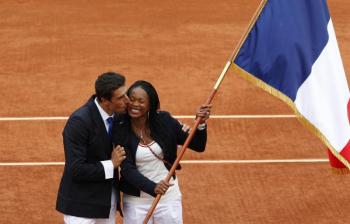 In this period of the end of school year and looking forward to the results of the high school diploma for 43 athletes, the INSEP vibrates more and more in the perspective of Olympics.

The meetings of the Advisory Committee of the Olympic Selections (Commission Consultative des Sélections Olympiques, CCSO) of June 28th and especially July 5th, will give the names of the qualified athletes before the National Committee of the high-level Sport (Commission Nationale du Sport de Haut Niveau, CNSHN) sends to the IOC the definitive list on July 6th.

In the meantime, some athletes are still in the Olympic race: the athletes (Track and Field), during European championships (June 27th to July 1st in Finland), the feminine French team of basketball which has to end in the first 5 teams of the Tournament of Olympic qualification (June 25th to July 5th in Turkey) and the French Federation of Taekwondo which has to announce the name of the 2 sportwomen qualified after the painful announcement of the injury of the world champion Gwladys EPANGUE!

Next meeting on July 17th (D-10), for the last information before Olympics!