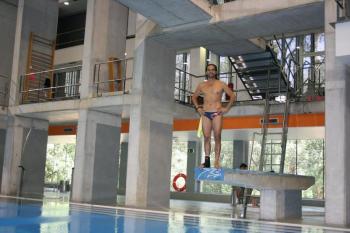 The eleven international watersports selections that in June and July passed by the High Performance Centre of Sant Cugat, along with Spanish selections that, as usual, were trainning there, achieved a total of forty-three medals at 15ns FINA World Swimming Championships in Barcelona. We can therefore say that the internationalization of CAR made it participant in nine gold medals, twenty-one silver and thirteen bronze.

Great teams of water sports such as Australia, and stars such as  high diver Orlando Duque , relied on High Performance Centre the final preparation of the World Championship, with excellent results translated into medals.

The preparation of these teams at CAR sport was managed during the year, and reflects the policy of the Centre to host groups of high international standard, which has been intensified in recent years. In 2012 it was a significant increase of over 800% camps of foreigners, thanks to the work of the Centre in the previous months and during the London Olympic Games.

Iternational groups medals, with Australia at the top

Australian swimming team, who made a two weeks stage with the whole team achieved three gold medals and ten silver. Australia ranks fourth in the swimming medal, the sixth overall BCN2013. The Australian world champions were  Christian Sprenger in 100m breaststroke, James Magnussen in 100m free and Cate Cambell in 50 m freestyle. Among the silver medals in the team highlight shine as they climb the second step of the podium in the women's 4x100, 4x200 free feminine and masculine and feminine styles 4x100, which indicates that we are facing a very fulfilled.

It also highlights Brazil, as its main star, Cesar Cielo, he spent two weeks in the CAR, and the last days was added to the rest of the swimming team. César Cielo has won two gold medals in BCN2013 in 50m butterfly and 50m free. It also won a gold medal for Brazil  Polyana Okimoto, in 10 km open water. To these we can add them two silver and four bronze.

The Danish team has been another who has medals after passing by the High Performance Centre in July. Three swimmers from the team have been on the podium, like Jeanette Ottesen, gold in 50m butterfly.

New Zealand, despite not winning any race, won three bronze medals, the swimmer Lauren Boyle at 400, 800 and 1500 m freestyle. Also climbed to third place on the podium Polish Konrad Czerniak.

Another highlight was the Colombian Orlando Duque, the first world champion in High Diving FINA World Championship, who asked to train in the diving pool of the CAR three days before the competition.

Twelve medals, one gold, for the spanish groups

For the national team, the 15ns FINA World Swimming leaved a balance of 12 medals, all for women and all engendered in the High Performance Centre, as some have been for athletes who trains usually in the CAR and others for those who come to prepare specific competitions.

The World Champìonship began with the repertoire of synchronized swimming team, on permanent concentration in the CAR of Sant Cugat, led by the young Ona Carbonell, that won the seven possible medals, as in the previous world championship. The girls got bronze medal in the solo technical and free, and the duet technical and free; and silver in the technical and free and free routine combination.

In swimming, the star has been Mireia Belmonte, who has done part of the preparation at the Centre,. She has accumulated two silver, 400 m styles and 200 m butterfly, and a bronze in 200 m styles. Belmonte has confirmed his great form in the World Cup in Berlin, where she achieved two world records and two gold medals at 800 and 400 frestyle, just when it is published that on next season she will train again at CAR of Sant Cugat, this time with his coach, Fred Vergnoux.

Mireia Belmonte medals add to the silver in the 400 m freestyle for Melanie Costa, who made his big leap forward this season under the direction of Jose Antonio del Castillo in the RFEN-CAR group. In addition to these medals, there were also a number of finalists Spain and records, including Marina Garcia.

Near the end of the competition arrived the only gold medal for the Spanish delegation, for the water polo women's team, a group that prepares all its international competitions in the CAR of Sant Cugat. The female water polo team has experienced great progress since they started working in CAR with more continuity, and was created junior group of the Catalan Federation.

These over forty medals given value to the stays done in the High Performance Centre by the different groups. Several of these international groups satisfied with their stay and the results achieved, have already expressed the intention to return to the CAR Sant Cugat in future cases, and the respective Federations, to bring these and other groups there to prepare competitions in the future.

BCN2013 has thus become a great showcase for the CAR is given to know the world of water sports, where athletes and technicians from different countries have been able to experience the quality of services and facilities. To those who have prepared the High Performance Centre it's also added those who have visited, during the competition.

Once finished the World Swimming Championship, CAR Sant Cugat has received in recent weeks preparing for the World Athletics being held in Moscow the british powerful selection, and this week also the Colombian football team. Among spanish groups trainning this August we can speak especially about the skate hockey team, world champion, who are preparing for the World Cup to be held in Angola in September, this is a selection that prepares all their international competitions in the CAR.