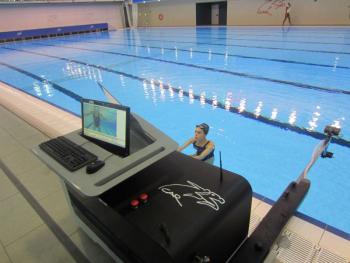 The presentation was chaired by the secretari General de l'Esport, and President of the Board of Directors of the CAR, Ivan Tibau, and the techinical explanation of the project was led by Andreu Roig, from the Biomechanics Department of the High Performance Centre .

The project is made by High Performance Centre of Sant Cugat, its department of biomechanics has been working on TwinDoly during last year, and is designed to be implemented in the New Module of the centre. It can be used both for swimming and for synchronized swimming and water polo.

The TwinDolly innovatively improving the performance of other existing systems, increasing the interactivity between the coach and the athlete during the training, in addition to autonomy and security in the operation of the system.

The TwinDolly is an autonomous device for the techinique analysis of aquatic sports, allowing HD above and underwater video recording of the swimmer along the pool and the immediate review of the recorded sequences. The energy required is very small, works on 12 volts, which make it independent of the electrical connectionsand has an autonomy equivalent to 500-600 pool lengths.

This project has been possible with the collaboration of some catalonian companies: Detall Design, Omina Electronica (Aqua Timing), INFAIMON and Masquevideo.

The TwinDolly was presented to the international media and teams in the 15th FINA World Swimming Championships, in Barcelona. There were present technical staff from Australia, United States, Sweden, Japan, Gambia and South Africa.